TO USE STOP BATH OR TO USE WATER 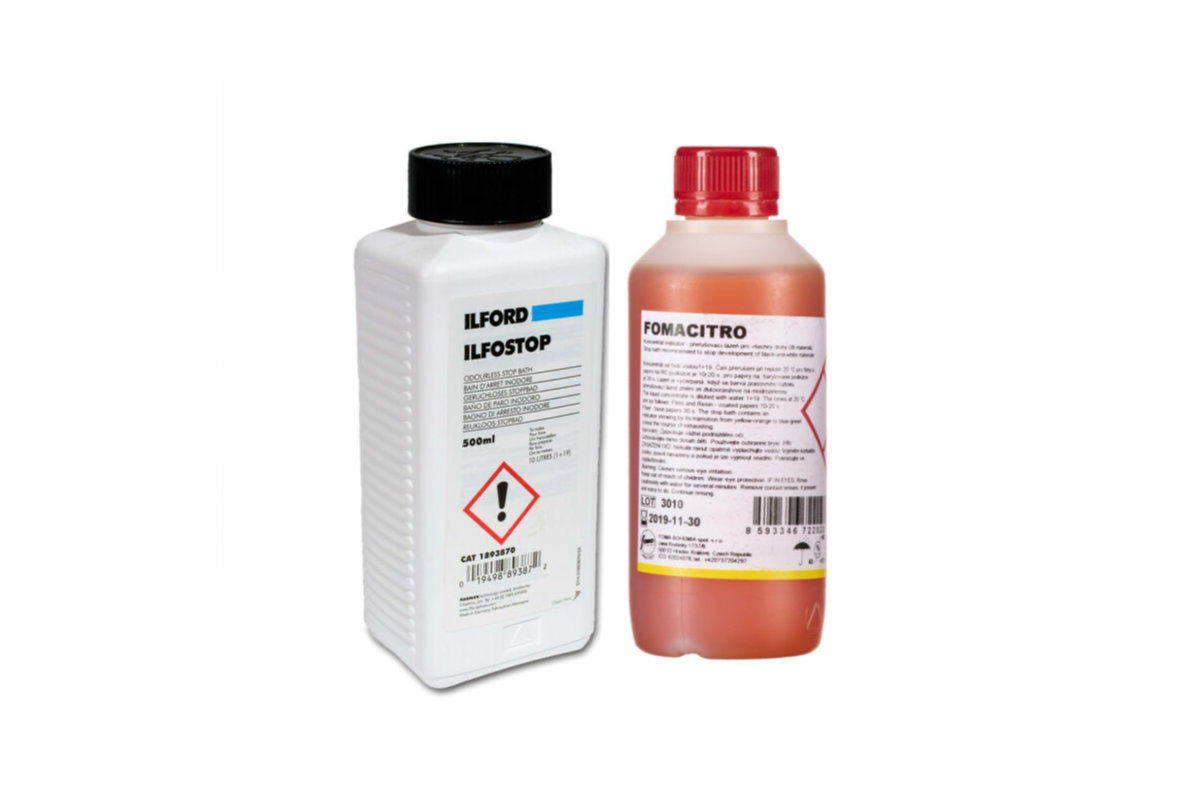 They materialise from some alternative dimension and burn holes through your precious artwork without mercy. Ok, it sounds like it is a plot from a technocrat revenge movie, where the artwork is being destroyed by an angry Luddite. What I am talking about, though, is the use of Stop Bath in the black and white development process and the alleged effect it has on emulsion. Surprisingly, the debate has raged for many decades between those who do and those who don't use Stop Bath.

I wanted to find out if I should be using Stop Bath or not. I have been using Stop Bath ever since I started to do photography in high school. I use it in film development and I used it in darkroom printing. So, you would, therefore, think this is a short article where I say "Use Stop Bath" and that was it. Sadly, no, as with many things in analogue photography, there is more than one correct way to achieve what you want. The thing that piqued my interest was the comments I got from a few of my website visitors, where some seem to favour Stop Bath and some are not.

Given there exist disagreements on the subject, I decided to undertake some research, which was for my benefit, as I didn't know if I should or I shouldn't. I wanted a clear answer to the question and started to read through my darkroom books and search the internet for the truth. Well, as you could already guess, even in Steve Anchell's Darkroom Cookbook, there is no real clearanswer. His book does explain the issue, and it is clear he feels water is a better option, he gives some great advice to those who persist in using Stop Bath by suggesting which formulas to use.

So, why should we stop using Stop Bath on film and paper? It turns out that alkaline developers with sodium carbonate react to the acid in the stop bath and can produce carbon dioxide bubbles, which in turn can cause small blisters on the emulsion on both film and paper. In film's case, it can create 'pinholes" in dense areas of the negative which show up as black dots on prints. Steve Anchell does recommend the use of a milder developer or a mildly acid-stop bath to minimise the formation of those pesky blisters.

Ok, so the first path of discovery was not much help. I, therefore, had to go to the internet to discover those whole truths about Stop Bath. I will be the first to say that the internet is both a blessing and a curse, and my search proved to be no different, bar the amount of polarisation on the subject.

Large Format Photography Forum shows why there is a disagreement, as discussed Here. Yes, it is from the previous century when film was all the rage, and interestingly some have never had any issues and those who believe that walking within 50 yards of Stop Bath will cause the resulting negatives to resemble a cheese grater. There was one interesting comment, which points out that regional differences in the water supply need to be considered. The makeup of water is also a contributing factor to how strong the chemical reaction is.

On Flickr, the debate is as much divided, with as many naysayers as not, as can be found Here. So, once again the great Internet has managed to give us a definite "maybe" to the question.

For my final research, I reached out to Chris Ried, of Blanco Negro fame. His response was very much on the side of using a Stop Bath. He wrote "I always use stop bath, Alasdair. One reason is it stops development instantly and secondly it creates a mildly acidic environment before going into an acid fixing bath. Thus preventing chemical staining from carried over alkaline developer to acidic fix."

So, what's my option?

Well, I am both for using Stop Bath and against it. I think the debate I have found on the internet rarely goes into specifics, but since being asked about the subject, I have been running some experiments. For example, when developing Ilford or Kodak film, I have never had pinholes in the film emulsion. On the other hand, I had stopped using Stop Bath on Fomapan 100 or 400 speed film, but not for pinhole reasons. The reason is that Fomapan develops larger grain if a stop bath is used, or that could just be my perception.

When it comes to darkroom printing, I use a stop bath for 30 seconds and drain for a good 15 seconds. I never experienced any problems with blistering, but then again I have not tried toning any prints, so I may be simply unaware of any issues in using Stop Bath. (Am I going to talk about Alkaline Fixers as a way to avoid the blistering issues in this article? No, that is a subject for another day.)

I will leave you with the following approach. When I do my film development, I will do the development stage of the recipe. Then I empty the developer and then 5 to 10 seconds in water with constant agitation at the same temperature as the developer. Then a one minute stop bath and standard fixer stage. Again, the above mentioned films are the exception, and I keep with my water stage.

So why do a quick water wash? When I was discussing the Stop Bath question with a friend who worked in the industry for years, he told me that they used to do the quick wash technique for a fine art photographer who would give very clear instructions on how each roll of film was to be developed. I have been using for about two years with problems of course grain being greatly reduced.

When I first put the article up for comment from a few groups on Facebook, I got a lot of responses. The opinions were fairly split between the Stop Bath users and those who did not.

What was more interesting was the suggestions for alternative processes. There were three different approaches offered up as an alternative. I will be list them below, so here they are for you:

The use of Vinegar was suggested by several people. I recall using it when we ran out of stop bath at school, but it was over 30 years ago. Research states that you need to use white vinegar and then dilute to a 2% strength by adding water. One litre is good for about 10 films or twenty 8" x 10" prints.

The major advantage of Vinegar, or more precisely, Acetic Acid is that it is less harmful to the environment. Check with your local authority, but it is safe to dilute and flush down the toilet.

Another approach suggested when doing darkroom prints by my friends on Facebook was to use a two-fixer stage process. You don't use Stop Bath, replacing it with a water bath, then into the first fixer bath for half the time, and then into the second for the same amount of time.

The reasoning behind the approach is that the sliver will mostly dissolve into the first fixer, and the second will complete the process making for a better fixing process. After a set number of prints, discard the first bath, the second becomes the first nbath, and a new second bath is prepared afresh. There are variations, but as with all things very little detail.

I was directed to Photrio (https://www.photrio.com/forum/threads/why-two-bath-fix.13017/) for a discussion on printing, and as I do do FB printing, I thought it would be a good thing to try, as it makes sense.