or what to do when your film breaks in-camera

It is not a situation that I find myself in often, but over the years I have had this happen to me a few times. On Saturday, I was shooting an auction event in Sydney, and something went wrong. I have had experienced two problems in regards to film breaking in camera, the first is where the film splits lengthways and the more common is where the film comes off the end of the spool.

So, what to do if you think you have an issue? The first thing I will do is to rewind the film. If it has split, there rewind sound is very different to that of broken film, and to rewind will feel harder to do. If, on the other hand, the film has broken while been advanced, you will not be able to wind the film back into the canister, and the rewind feels like the film didn’t advance.

The split film issue is one that will be the easiest to get out of the camera, as you are still able to the rewind the film. The main problem is when you try to develop it.

A broken film, or one that has just pulled off the spool presents its own problems, as in knowing if it is or the film has not been loaded correctly. This is why I check three or four times during the shoot that the rewind knob actually spins when you advance the film. Otherwise, and as I have often seen, people are likely to open the camera up and end up exposing the film and ruining any chances of saving the photos.

Now, how I handle a broken film depends on where I am and what I have to hand. To get the film sorted, you need to be able to do it in total darkness. So, either have a film change back handy, which in my case I did not, or the other option is to find a place that is totally dark. In my case, I was lucky to find the toilets were able to turn the light off. 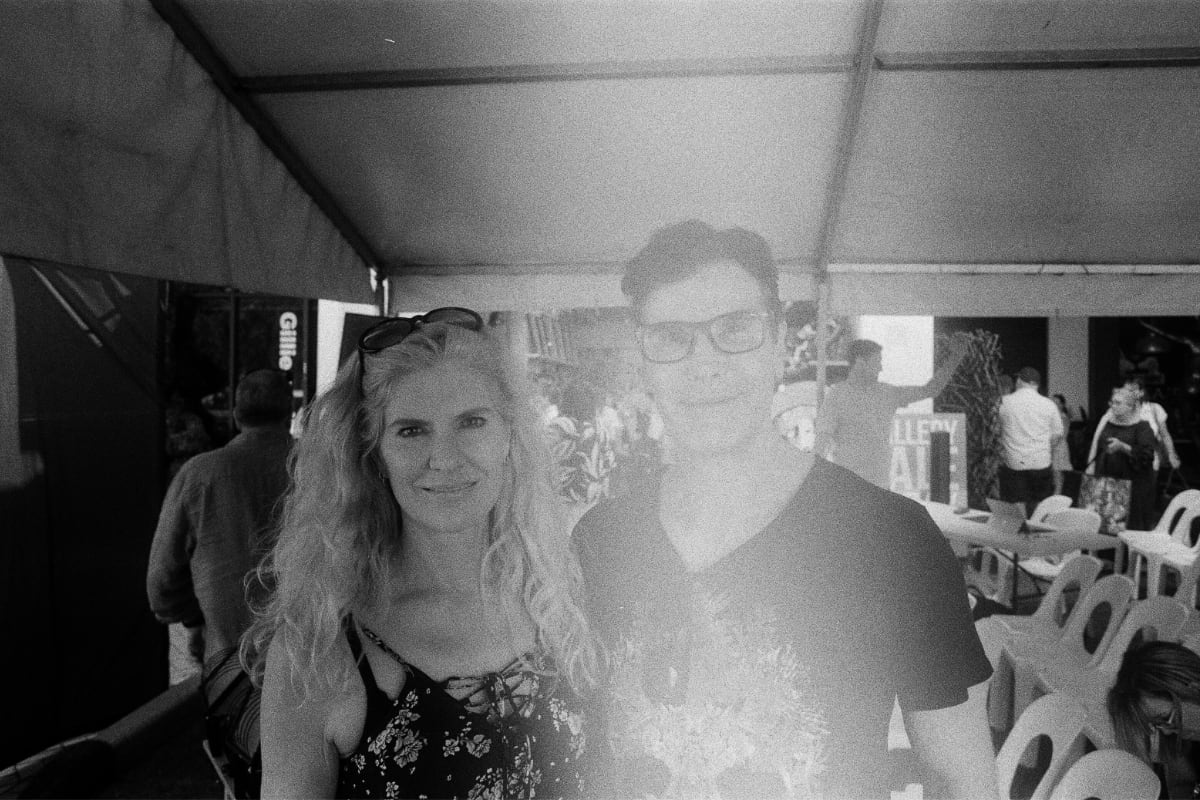 Gille and Marc: Having managed to find a dark place and blocked as much light as possible, my phone went off and was very bright in the darkness. Those hoping to get lovely light flares if the film get some light will be disappointed.

So, getting my wife to block the toilets, I placed the camera and a black plastic film canister on the toilet lid and then turned the lights off. Now, this is like the blindfold game where you have to remember where everything is. Luck was on my side in regards to that, and I was able to find the camera, open the back and extract the film.

All was going well until my iPhone and Apple Watch decided to glow. I had just opened the back of the camera, and slammed it shut very quickly. Then, after I was dazzelled by the light from the techno gadgets, I knocked the canister off the toilet seat and spent a minute finding it. Finally, in what felt like a very long time I found it and managed to get the film safely into the canister. 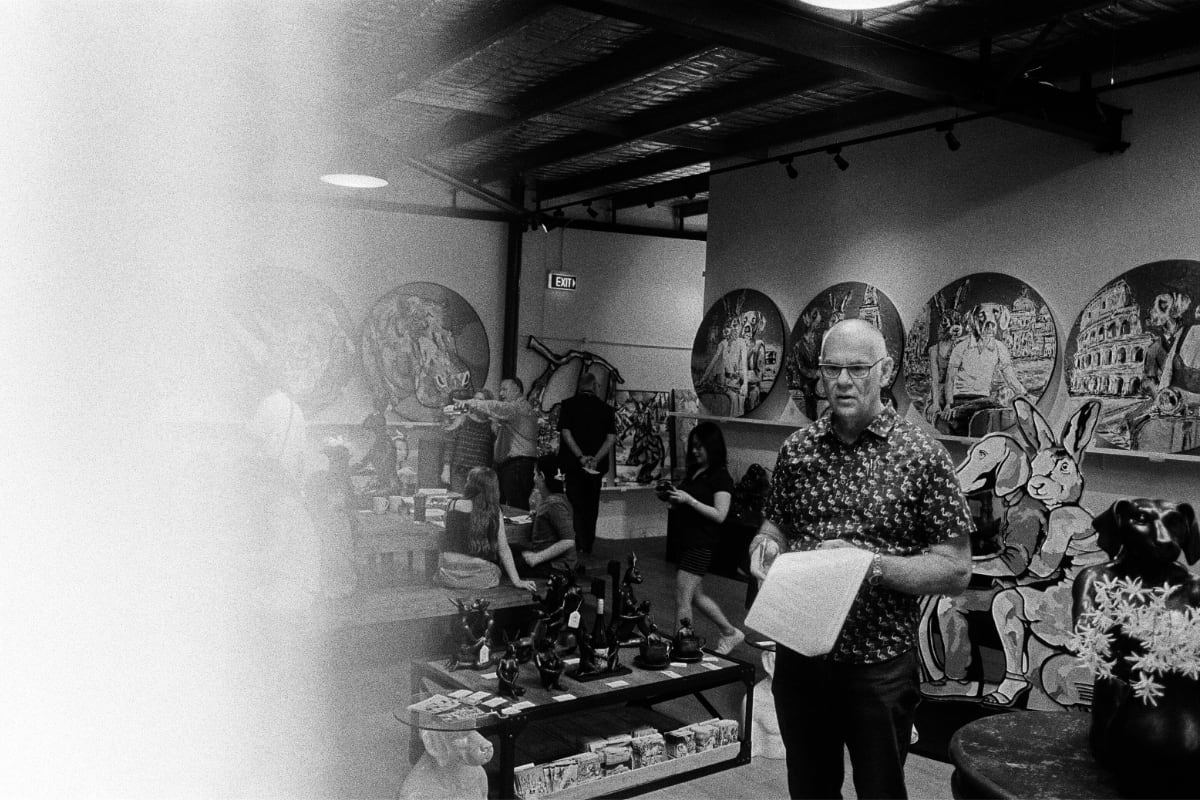 Man at auction: As we can see, except for the part of the frame exposed to light, the rest of the frame has come out, and in this example I could use the right side of the image.

So, yes I managed to get the film out of the camera and into the canister, but I did make a few mistakes. Next time I will leave my phone and watch outside. I won’t say I will bring a dark bag to every shoot, as it depends where I am, and if I can carry everything. I will develop the film, shortly and hope there are some images saved. I hope the next time I have film breaking or coming off the end of the spool is not for a long time, but whenever it is, I have a plan and a few options to get things resolved. 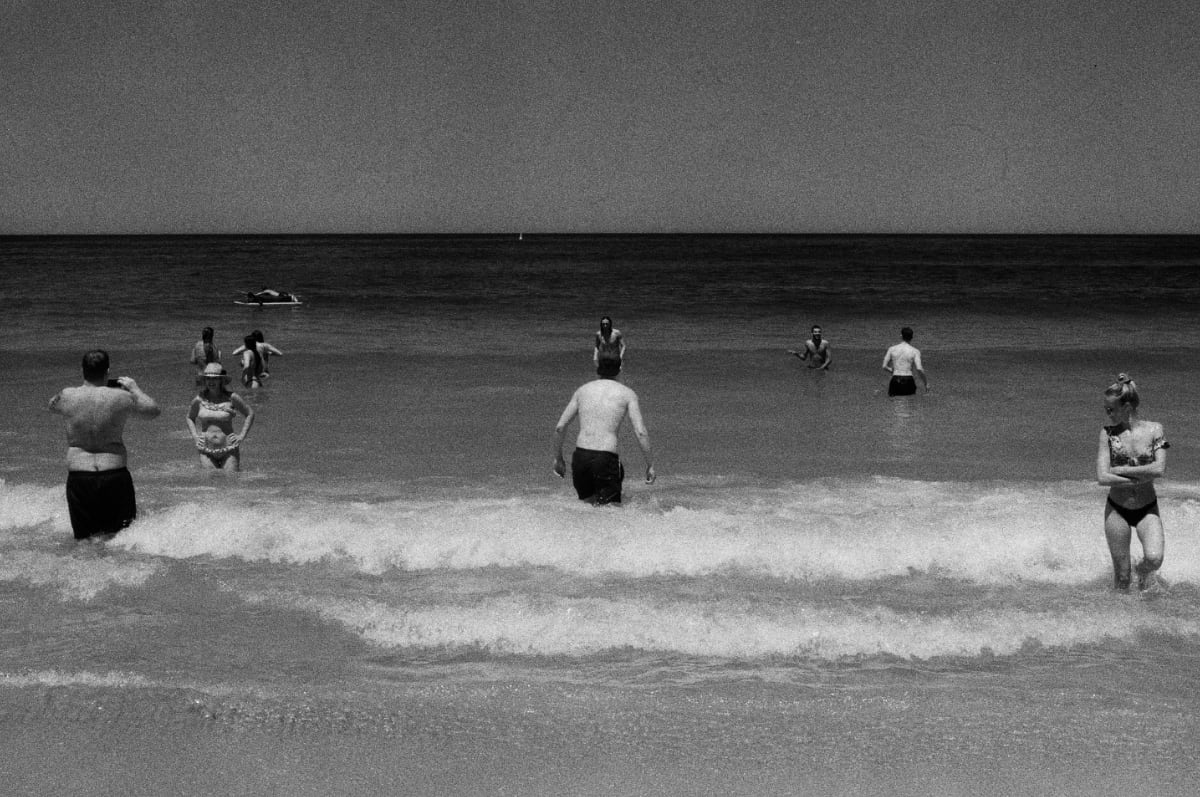 Bondi Beach: Yes, the effort to save the file is worth it.  Out of the 36 images, I lost 4 from the end of the film, another I can partially use, and the rest are just fine.  Main point is not to panic, instead you need to deal with it.

Help me bring more Analogue Photography articles to my website by "buying me a coffee." This links directly to my Ko-fi page.

So, if you like my article, please buy me a coffee! For all those who give me some assistance, you will be entered into the monthly prize draw of a print. I will be very grateful of any assistance and all money will be used for paying my website fees, new articles and to buy chemicals and film.