While being at odds with itself or sounding like a vintage film made to order, the title is the best way to describe this very unique film. Retropan 320 Soft, the film Foma released in 2015, is a modern film and one that film shooters need to explore; after all, if we want more films to come to the market, we need to support those companies that give us the things we claim to be passionate about.

Being an avid film photographer, I was very pleased to have been introduced to Retropan when dropping into Blanco Negro. Christopher Reid, at http://blanconegro.com.au, is one of the unsung heroes, who quietly promotes the film cause. It was his recommendation that lead me to try Retropan and armed with a couple of rolls, I decided to see just how good the film was for portrait photography in a ‘vintage’ style.

Like many who have come back from the digital abyss, I have now sold all my digital cameras as I have rediscovered the joy of film photography. I developed a respect for the discipline it demands. No more quick test shots to see if things are working or spending time staring at the little screen at the back of the camera for me. It is now a case of planning the shot and checking if all settings are correct before taking to photo. This does not mean we always need to have light meters and backup cameras and controlled light. Before the world was fully automatic everything, people still shot and were able to obtain excellent results by learning to read the light.

>Anyway, I digress from our discussion on Retropan 320. My first task was to research just what type of images the film produced. I needed to know more about the characteristics of Retropan so my first port of call was Foma’s website. It provides a good starting point for a quick summary, but I certainly needed more details. So, on to the web and searching for Retropan I came across a section in APUG forums which discussed real-life experiences with the film. Then it was a search on Flickr and Instagram to get a feel for Retropan photos. It certainly helped, but there is nothing better than shooting a roll of film to understand just how the film works.

I was ready, and with all the insights gleaned about the nature of the film, I planned to take my first portrait in an area with subdued light. I was over in Canada, and with a pocketful of Retropan 35mm, I started to plan the types of shots I wanted to try.

Peter in the pub 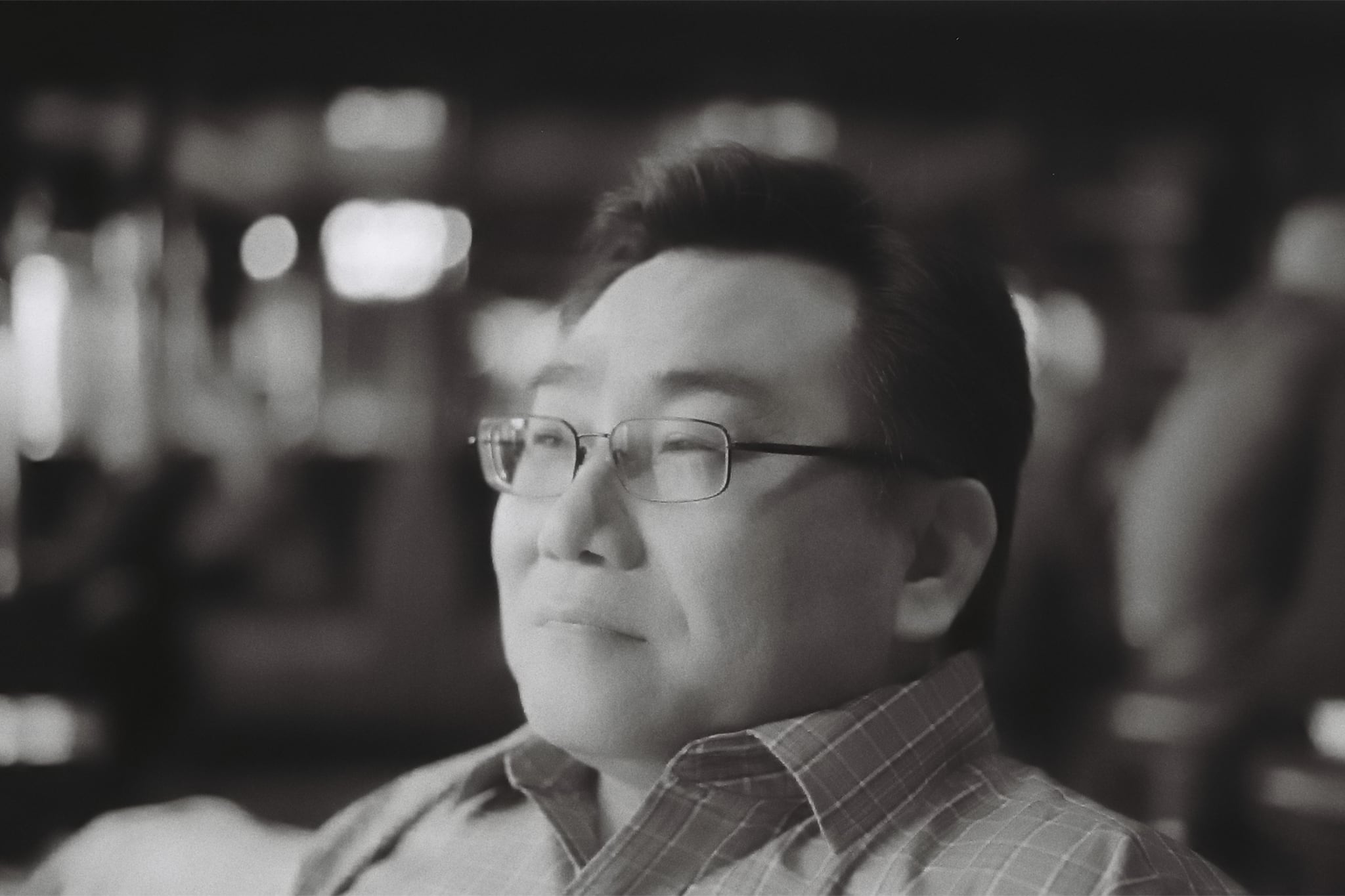 My first shot was taken while having a beer in a pub in Vancouver. I found a spot that had the right amount of light. The setup allowed the lowlights to provide the tone of the image, and have Peter ‘pop’ out from the background. I metered for the shadows and allowed the highlights to do what they wanted to do.

The portrait of Peter shows excellent skin toning and still has reasonable contrast. This is where those who love dark greys and blacks will love to work with the film. Limiting the highlights gives us reasonable contrast while still being soft, almost nostalgic-looking images. As you can see, the photo has a reasonable amount of grain, but it is the nature of the film. I was also told by Christopher from Blanco Negro that the more extreme grain can be controlled by using the matched Foma Retro Special Film Developer chemicals during development. 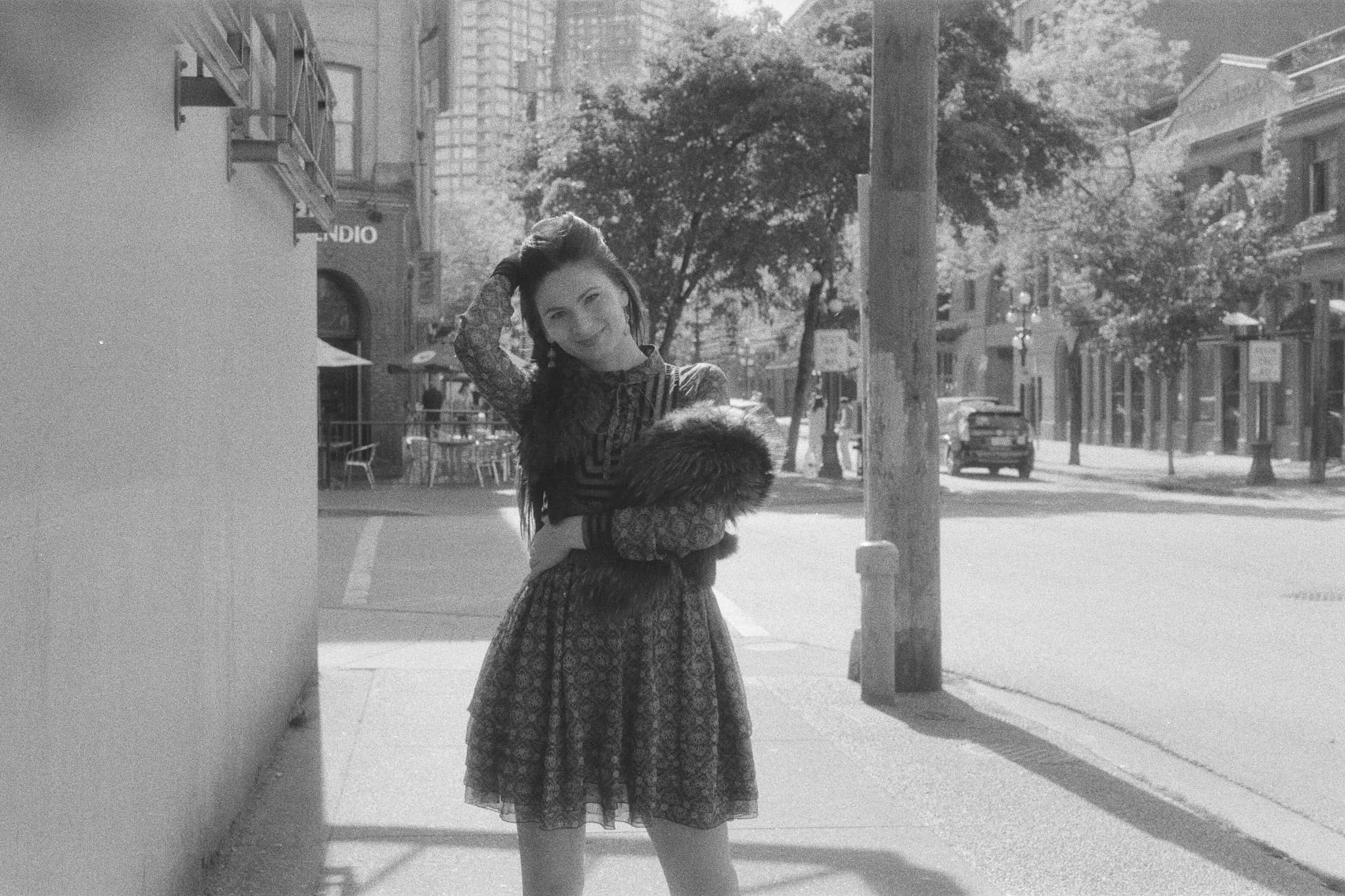 For my next shot on Retropan, I want to share a photo that is the opposite of the subdued lighting of the pub. So, how does the film fair when shooting directly toward the sun? Well, as you can see from the shot of Kristina taken on Water Street, in the Gaslight district of Vancouver, there is a beautifully soft background, while she pops out from the image due to the very good separation between the highlights and her.

Metering was done on Kristina’s face, which is the main point of focus when taking the image. The great thing about this shot is the full range of tones that the shot covers. We have lovely highlights around Kristina, have perfect mid tones and the darks are not extremely black. The highlights make Kristina pop out of the image without the need for a fill-in flash or reflectors.

Kristina in a Polkadot Dress 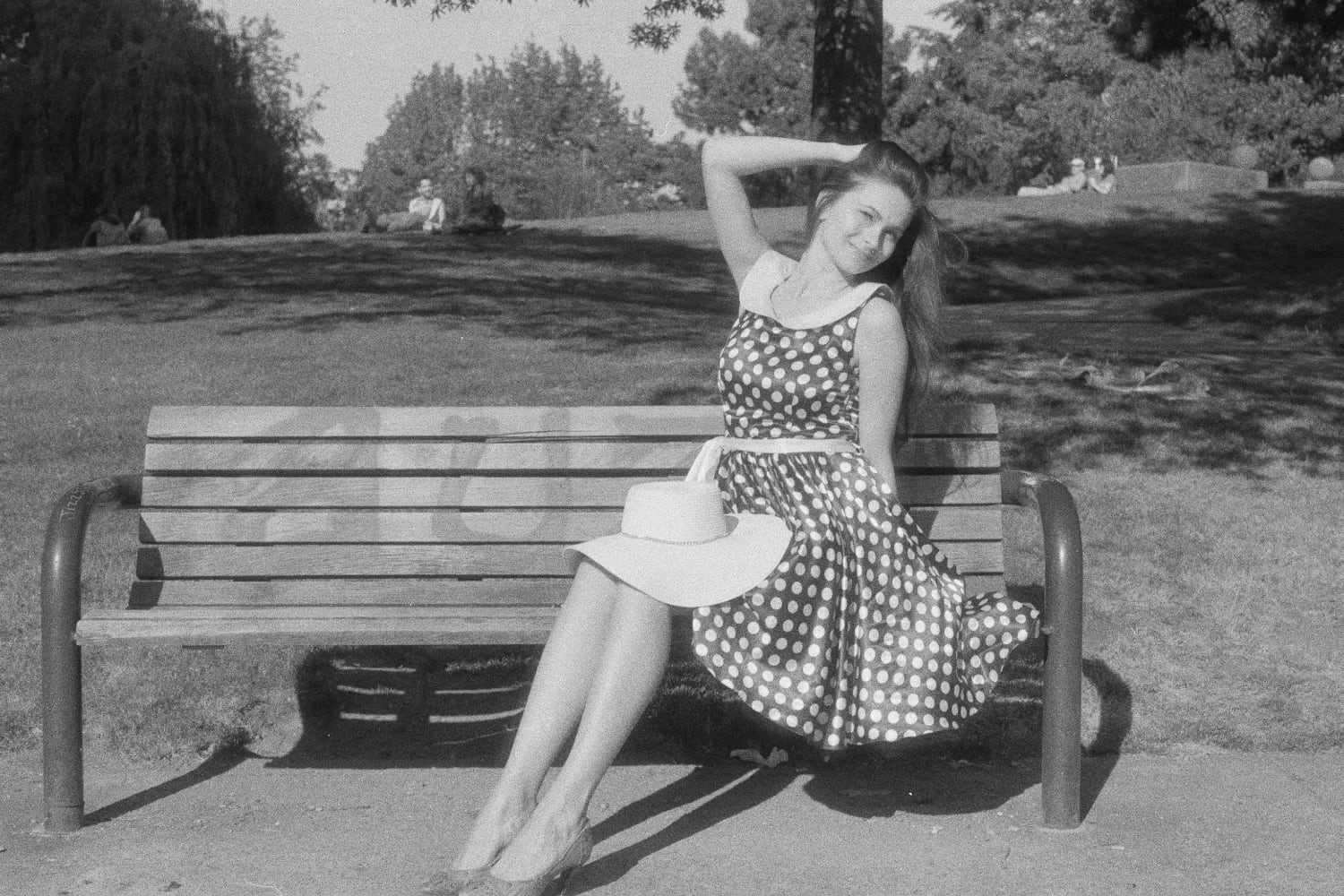 As I like the idea of using the film for portraiture work, I asked my model, Kristina, to pose with the sun on her right side, I wanted to see how the film would hold up. Got to say the feel is brilliant and the contrast is controlled. Metering for her face, well the part I could see meant the skin seems natural and not too dark.

Metering was done on Kristina’s face, which is the main point of focus when taking the image. As with the Water Street photograph, the highlights make Kristina pop out of the image without the need for a fill-in flash or reflectors. 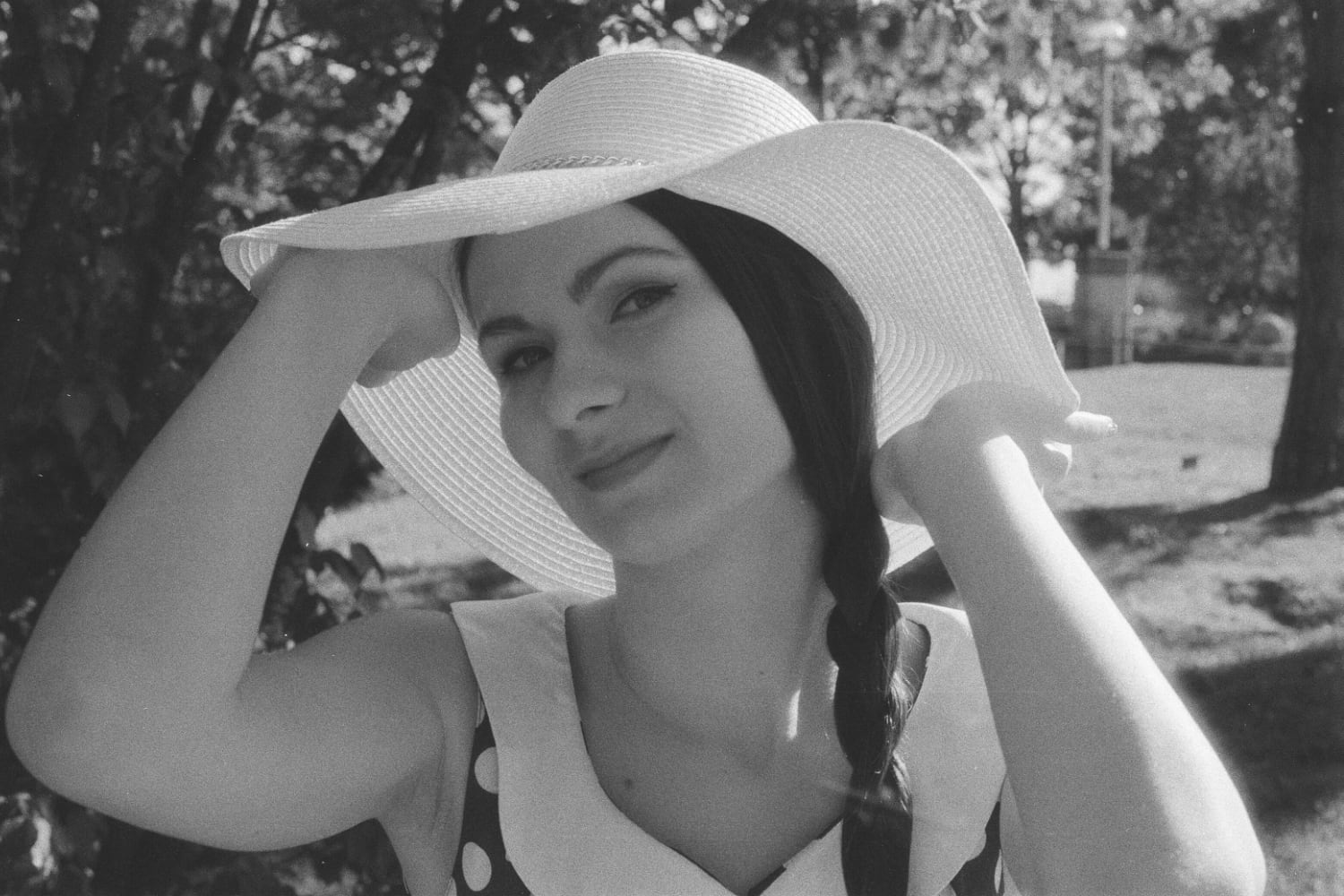 Asking Kristina to hide mainly in shadow, I was keen to see if we could get a glow from the bits in the direct sun. I am very happy with how the shot came out. I exposed her face, which was spot on, while the hat and the park behind all maintaining detail. There was a good balance between the strong light on Kristina and the subtle lighting in the background.

This is the ideal way, in my option, to capture portraits with this film. The glow effect on Kristina’s forearm is the highlight spilling over to underexposed areas. I have to experiment more to see if it is the nature of the film or if it is the way it is developed. 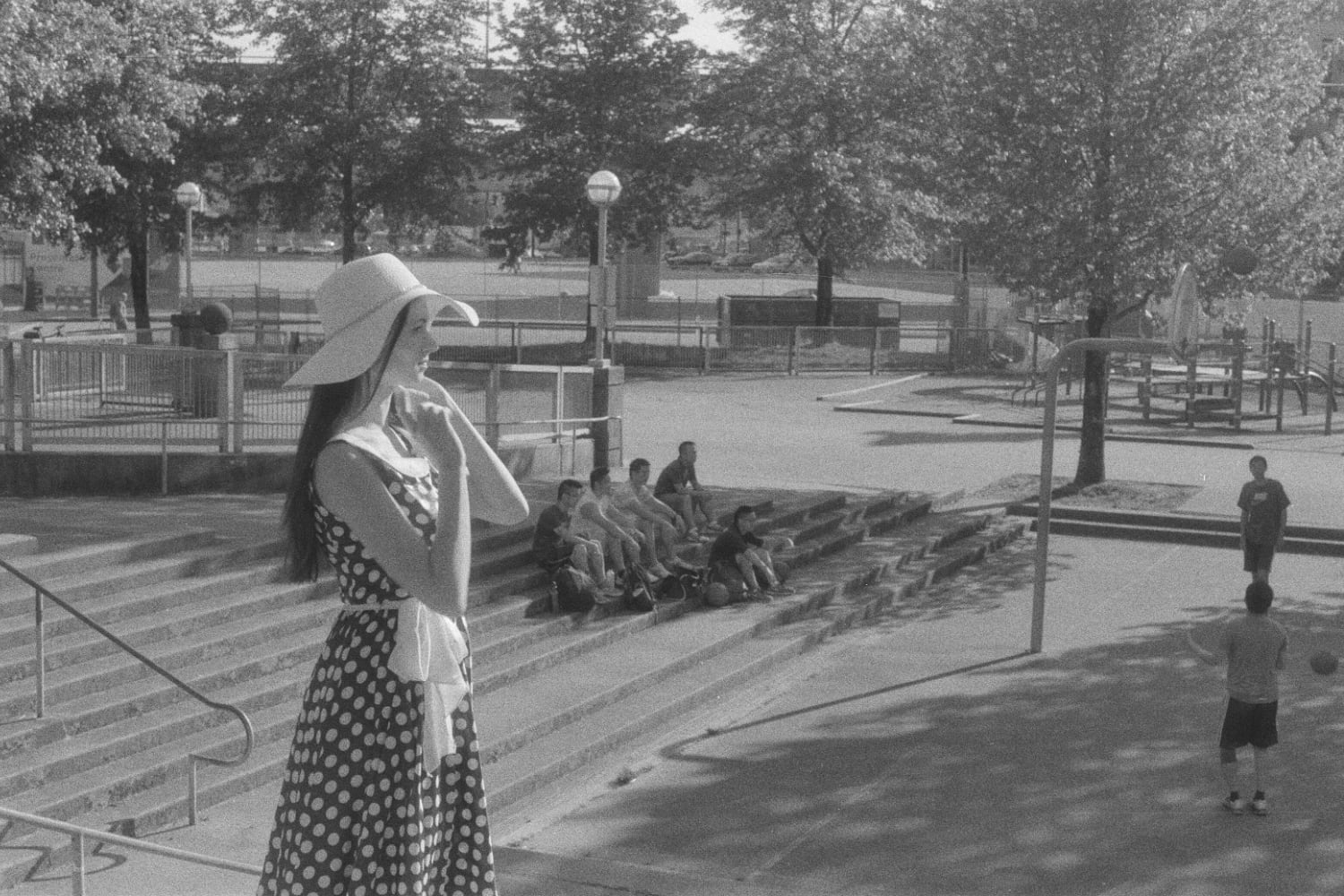 As we can see in this photo of Kristina, the image has a good range of tones, and still holds its soft nature. This was due to shooting when the subject was in the shade of some trees. If you look at the line of players, they are quite flat, so I would make sure there are some highlights on the subject to ensure you hit the sweet spot of this film.

Kristina against the wall 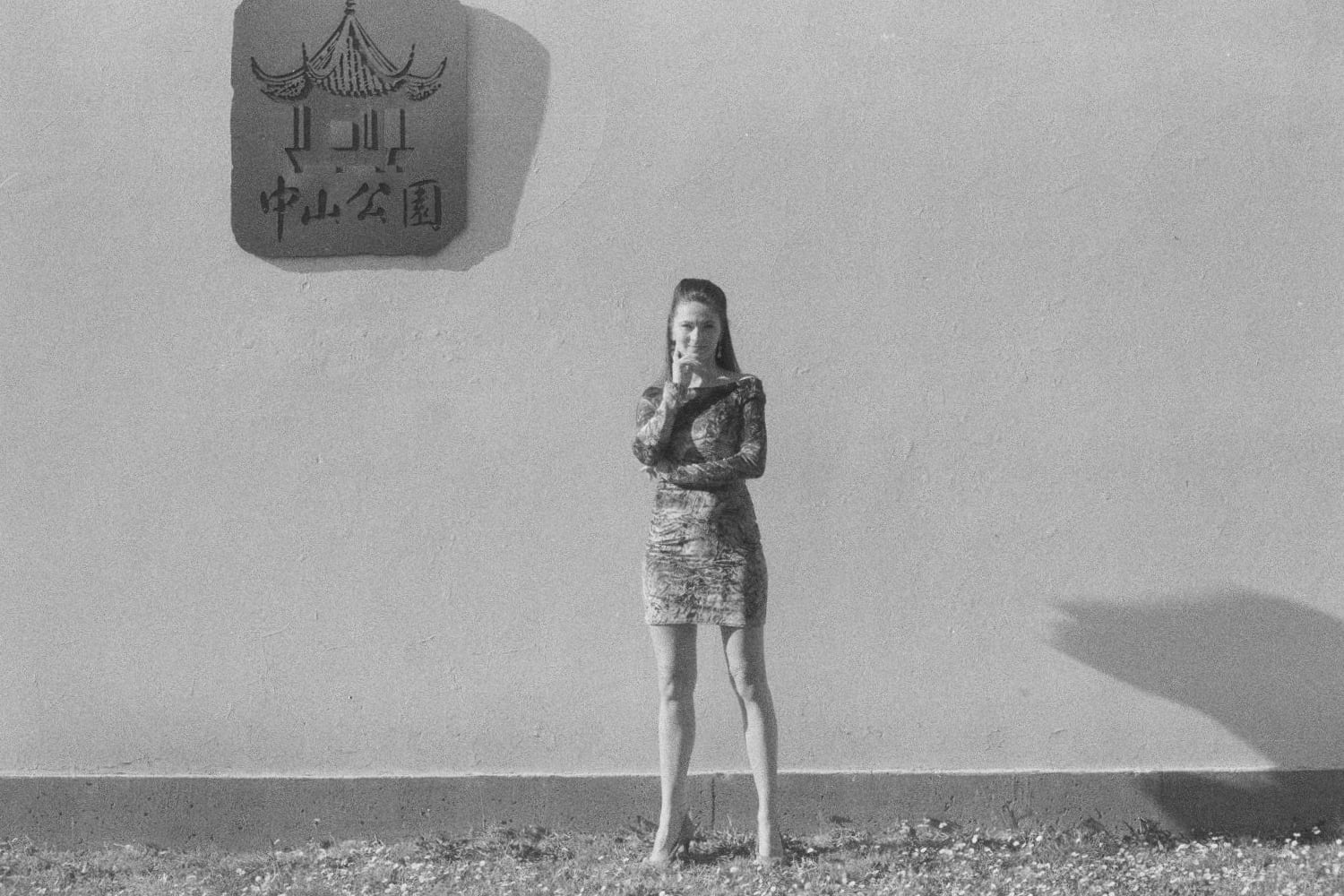 This shot was taken where there is an excessive amount of sun hitting a wall outside the Chinese Walled Garden. I wanted to see just what the outcome would be, so I metered off the face and ignored everything else. I am glad that it was not all burnt out, but has worked well.

As I understand the images the film will produce, I am more confident it going for shots that are very much on the edge of where this film works. This allows for some especially beautiful images to be created straight from the camera, which should always be the plan when shooting film.

Shooting in medium format allows me to be less concerned about graininess and more focused on the shots I want to create. Unlike 35mm, the size of the image is perfect for scanning, as we get fewer artefacts and are able to produce large prints.

Children on a merry-go-round 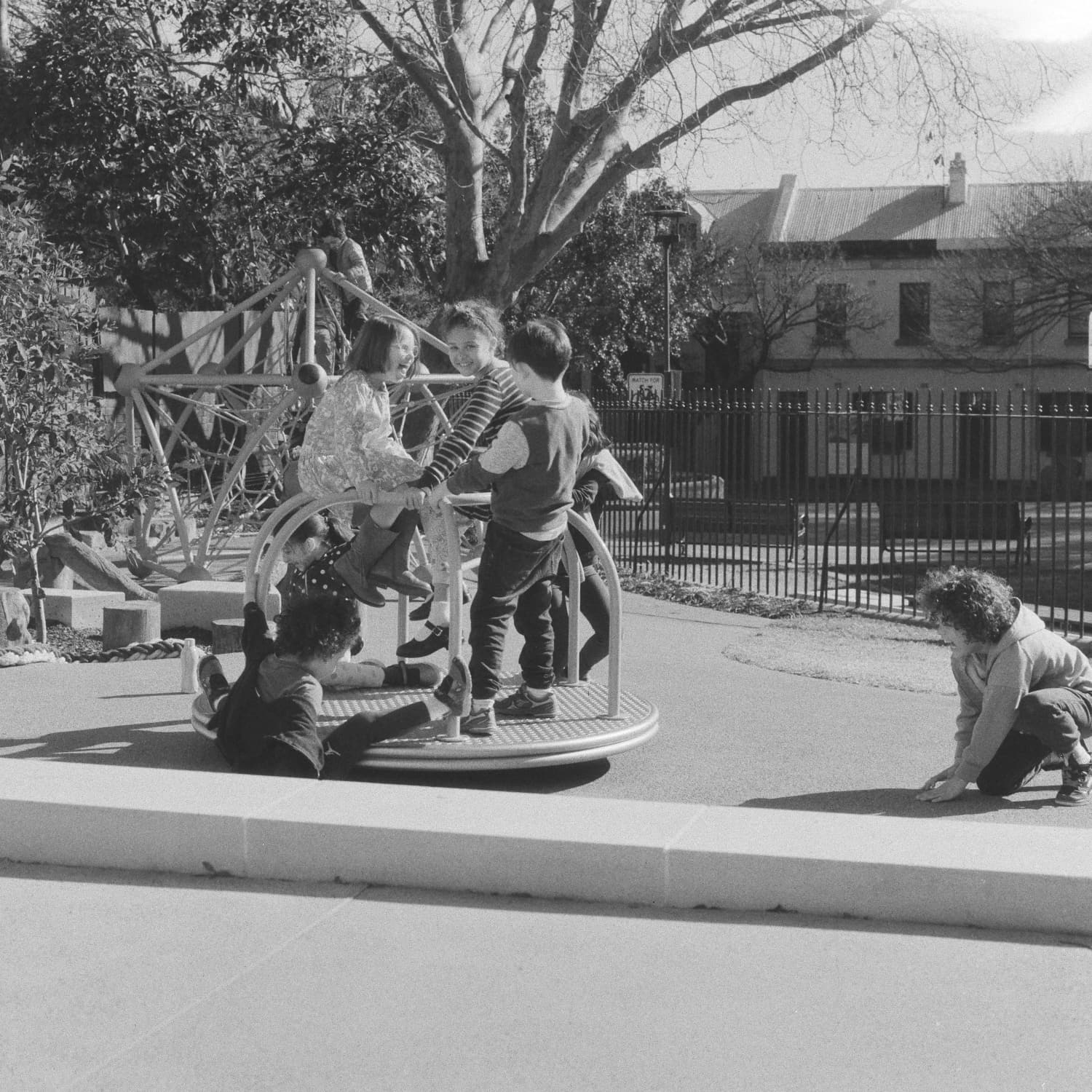 From the image, you can see it was shot at midday. This is always a challenge for film, given the amount of contrast in the shot. Overall, the results the film has given, it has captured the children playing, with the feel of halcyon days well spent. The glow adds to this feel without being too pronounced. 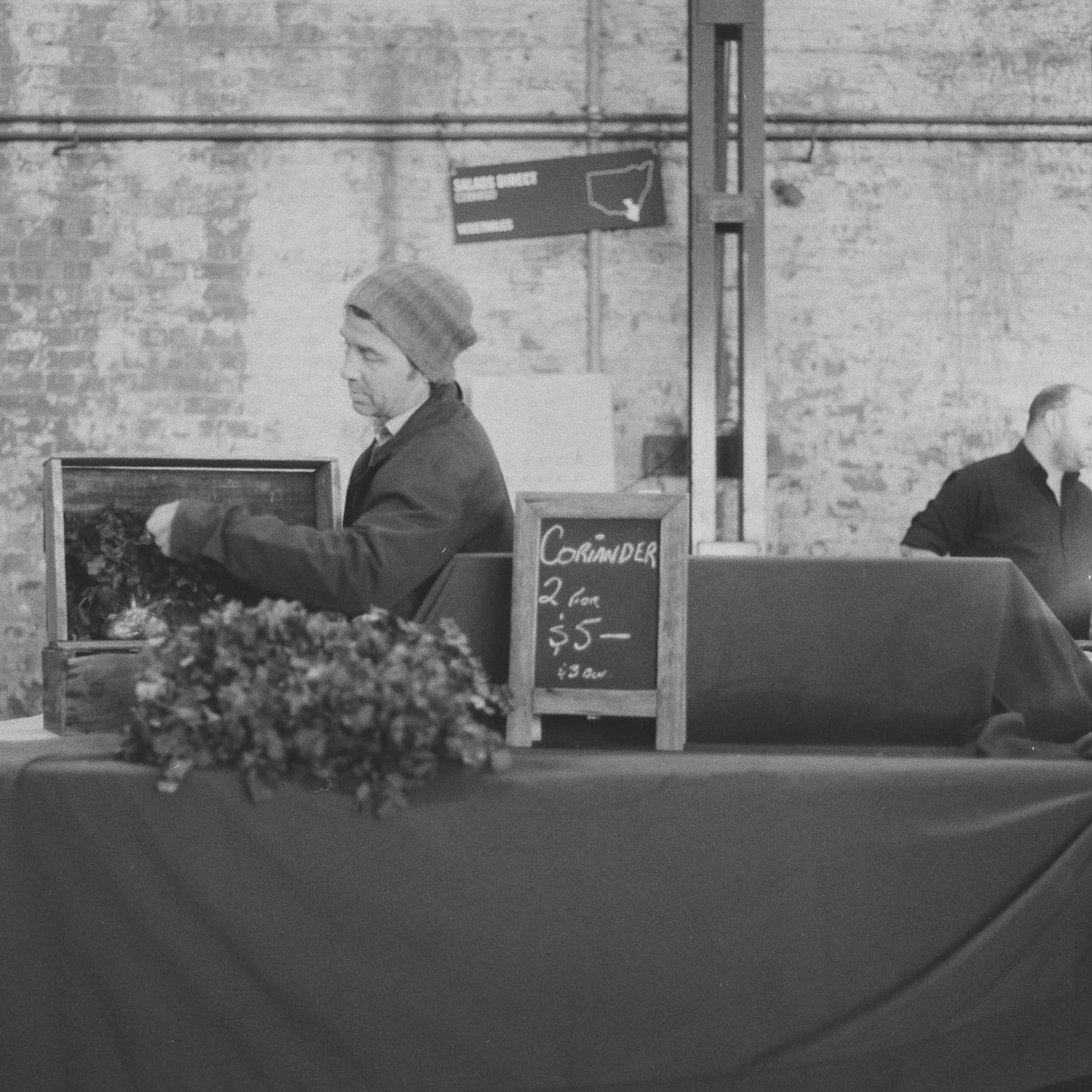 The Coriander Seller photo is a shot on the lower edge of where this film works. With suppressed lighting, the feeling of any pop is subdued. The tonal range is great, but the image needs a bit more in the highlights to make the whole thing come alive.

While the photo is flat, it is not to say the photo has failed to convey intent. The image was captured before the Farmers Market got very busy. I wanted to present a visual narrative that showed the isolation of the stall holders, who had driven hundreds of kilometres to sell their goods. 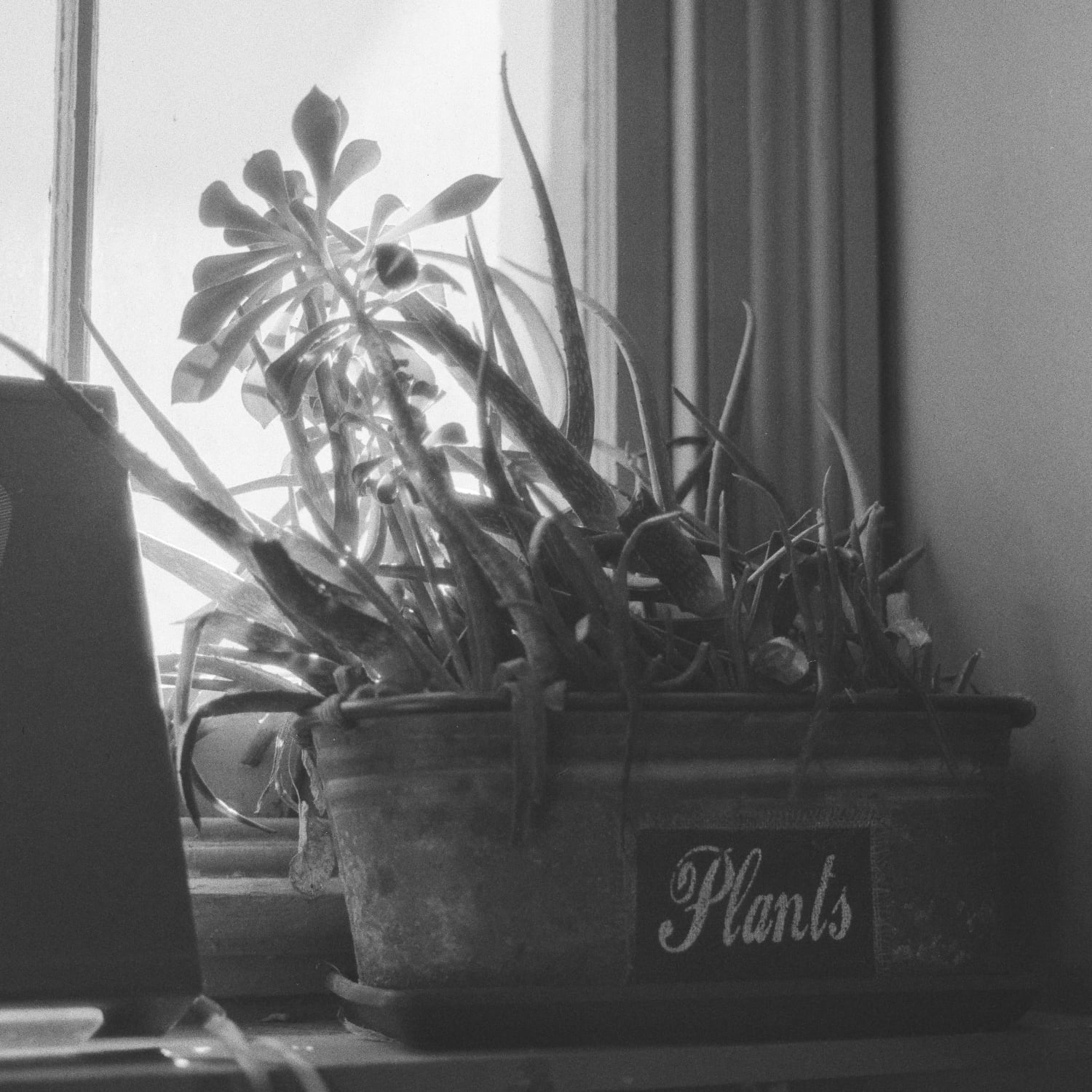 My final discussion is about an image that had both strong highlights and plenty of shadows. Hard ask from even the most modern of digital cameras without the use of some post-production work, so I was very keen to see just how well the film held up.

When taking the photo, I metered for the bottom part of the stem, deciding that that was the reading that would give a good point to allow for the highlights and shadows to still have some detail. Looking at the amount to detailed retained within the top of the plant shows just how capable this film is. There is information in all but the actual window, which given the bright day outside is to be expected. I can’t fault the performance of the film, as it has done an amazing job given the conditions.

Note: Recently, Foma announced they were ceasing the production of this lovely film. It is sad news, and I for one would buy and shot more of it if I could buy it. It is a truely amazing file.

So, as a final word, I really like Retropan 320 Soft film. It gives a great result that is not necessarily pin-sharp, but more capable of telling a story. The truth is that, as Keith Carter said, “Sharpness is overrated!” This film makes us more introspective, in that we need to understand what we are trying to achieve before taking photograph. That is true of film photography in general, and more so for Retropan.

I certainly see Retropan being avoided by those who have grown up with a super sharp digital camera, and those for whom the requirement is for a non-thinking film. I would suggest that no matter what your background, if you have a 35mm or 120 film camera, a 5” x 4” or 8” x 10” large format camera, simply buy some Retropan and give it a go. If you are like me, you will be blown away by the beautifully retro images that this film gives. So, while I won’t shoot exclusively with Retropan, I will certainly use it for clients that need a dreamy retro feel to their portraits.